I think all beauty lovers are familiar with the Urban Decay Naked palettes. I love them a lot! But before I bought my first ever Naked palette, I bought two single eyeshadows by Urban Decay. I never really though of reviewing them, until about two days ago, when I realised how pretty they actually are and how often I use them. They are definitely worth the attention, so therefore I’ll review them today. If you’re interested, keep on reading! The first color I’m going to be talking about is called Suspect. Suspect is a shimmery medium brown color. I really like colors like this for in the crease. The shimmer in there is not too much which I really like, especially since it is a crease color. The eyeshadow comes in a pretty cute packaging with a sticker including the name of the eyeshadow on the back and a really pretty front design. I really like the way the Urban Decay eyeshadows look. The color suspect is also included in the Naked 2 palette, so if you already own that, you already own this color.

I have to say, Urban Decay eyeshadows aren’t cheap, and if you can, I recommend buying one of the Naked palettes instead of a single eyeshadow like this because for the price of 2 single eyeshadows you get an entire palette and a brush. That’s a way better deal.

The reason why I like suspect so much is because it’s a color that looks good with every single look. Whether I use a gold eyelid shade or a pinky shade, this always does the job. That’s a very important quality in my opinion, because this way you’ll get a lot more wear out of the shadow than you would if it was a very specific color, and because it’s not insanely cheap it’s a great quality. The eyeshadow is also perfect for both a day time look as well as a night time look. During the day you can just use this in the crease and at night time if you want to darken it up a little you can either apply a little more of it or you can add an even darker shade. The next eyeshadow is called Buck. Buck is one of my favorite eyeshadows by Urban Decay. It’s the perfect matte medium brown to use as a transition color in the crease area. Besides that it’s also perfect for filling in your eyebrows if you have dark blond brows. Buck is also included in the Naked 1 palette, but if you’re like me and you love Buck a lot, it’s nice to have it separately as well. I personally use it a lot, I use it when I use the Naked palette, but I also use it in combination with basically any other eyeshadow I own. It’s just perfect. It’s also a really nice color to have if you enjoy very neutral and matte looks, or if you just want to define your eyes a bit. When it comes to the staying power of these eyeshadows, Urban Decay did an amazing job. All Urban Decay eyeshadow last all day on my eyelids, and mine are pretty oily. They don’t crease at all and they won’t end up looking weird at the end of the day. Besides that I also feel like the shadow itself lasts pretty long. I bought this about 3 years ago already (wow, time flies!) and it still doesn’t look like I’m going to hit pan any time soon, so that’s definitely a plus.

Just like suspect, buck is also a very versatile color. You can combine this with every single look, which is something I definitely do. But if I had to choose between buck and suspect, I’d definitely go for buck. That because buck is even more versatile than suspect and because buck is really one of those multi purpose colors. I’ve used this for my brows in the past when I forgot to bring my brow powder, might even be able to shape with it and it’s obviously useful as an eyeshadow. 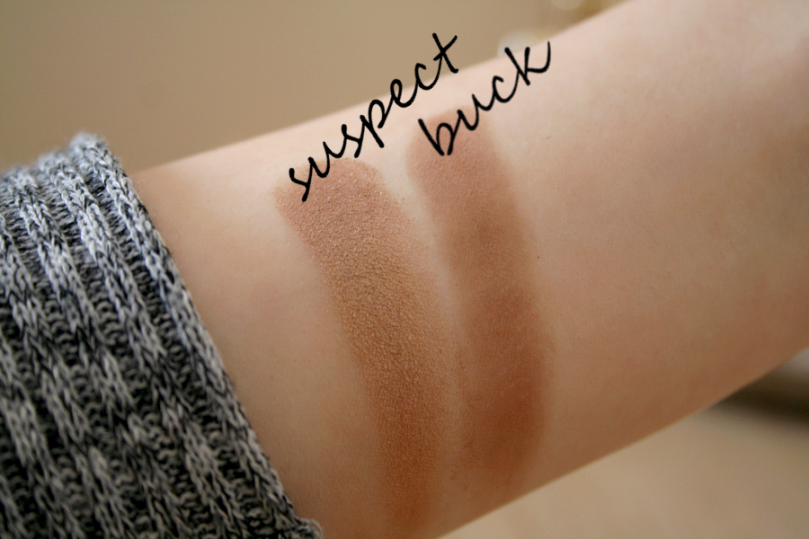 Pigmentation wise both eyeshadows are perfect. Suspect is a little more pigmented than buck is, but I really like that. Because I use buck as a blending/transition color, I don’t want it to be too pigmented, but it’s also not invisible, which is obviously important as well. I feel like the picture clearly shows that the shimmer that is in suspect isn’t over the top, it’s just a nice little sheen. I really like that about it.

Over all I’m pretty positive about these shadows. I do have to say that they are a little more on the pricey side, but because of the amazing quality I think both of them are definitely worth it. But honestly, if you already own one or more of the Naked palettes, I’d say don’t buy these unless you really like one of these colors (just like I really like buck) and you’re sure you’ll get a lot of wear out of them.

That was it for today’s review. I hope you enjoyed reading it and let me know if you have any experience with Urban Decay eyeshadows and if so what your opinion is!

The Urban Decay Single Eyeshadows are available at Sephora and Ici Paris XL for €19,60.